Do you swear to tell the truth? 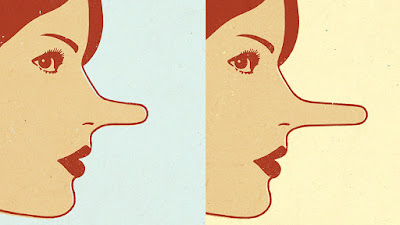 Yesterday I picked up my son Sam from school.
When we came home and I unpacked his schoolbag, I noticed there was a toy in there that didn't belong to him but to the school.

When I asked him about it, he said he got it for Christmas.
When I probed him a bit more he said his teacher gave it to him as a present.
And when I asked him if his teacher would confirm that to me he admitted he liked the toy, secretly hid it in his bag and took it home...

Because my son is only 4 years old he's not very good at lying. Moral Development hasn't quite kicked in yet.
But by the time he is an adult, he will probably be a lot better at it. And he will still tell several lies a day.

Six, to be precise. According to research.

As adults we lie during presentations, during job interviews. We lie about purchases we made. We lie to friends and to strangers. We lie about how we feel.

Mostly with just one simple reason: to avoid confrontation.

So does the truth always set us free?
If we want to lie a little to get along or bail us out of awkward situation are we betraying our authentic self?

Perhaps this is my Dutch Directness speaking, but I believe the answer is that the truth almost always sets us free. The key is to check in with our intentions first.

Do we wish to tell the truth because we are frustrated with the feelings of guilt building up?
Then of course it feels damn good to tell the truth. It's like taking a emotional poop (excuse the metaphor) which provides instant release from pressure.

But when you are just dumping your emotional turds on others (excuse the metaphor again, but I'm on a roll now..) you are flushing your relationship down the toilet.

Do you wish to tell the truth to connect closer to your colleague, client, partner, friend or boss?

Then the worst truth is always better than the best lie.

At InterACT we give workshop participants the opportunity to practice these open and honest conversations with professional actors. And every single time the biggest eye opener is that no matter how badly they think someone will react when they tell the truth, the lie often causes more dismay that honesty.

This morning I dropped my son of at school.

I asked him if he wanted to tell his teacher what happened. He firmly shook his head and said he was afraid his teacher would get mad at him for stealing.

"It takes courage to tell the truth, Sam." I said.

And for a while we said nothing.

Suddenly he looked up at me and said he changed his mind.
And a few minutes later, with blushing cheeks, eyes down and squeezing my hand tightly, my little boy struggled through the words to tell his teacher the truth.

She kneeled down and gave him a big hug.

"I know that must have been hard to tell me you took that toy. But I am so glad you chose to be honest about it..."