The Power of Role Reversal 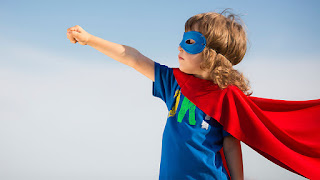 Our son Sam turned three years old last month. And let me tell you...his pretend play is firing on all cylinders! Construction sites, dinosaur battles, horsey rides and chasing the 'bad guys' - all walls of reality are broken in imaginary play as he loves to pretend to be something or someone different from himself.

I absolutely love the fact that our little toddler already knows that the success in life is largely pinned on the ability to positively interact with others and that the best way of learning this is by using different roles and then acting them out.

I believe that we don't have to be kids to learn through play. I believe that in adult learning the concepts of role play are still one of the most powerful and effective ways of learning and developing new skills.

For example: My son loves to switch roles in his pretend play. I have to play him and he get's to play me. During these role plays between me and my son, it is like I am looking in the mirror... Through his play I learn how he feels about the way I talk to him, what he retains from what I try to teach him and most important...he has the opportunity to express his needs in a safe way.

When I work with professionals in training workshops I often use the same concept. This method is called Role Reversal and it's a technique that is perhaps one of the most effective ones in Drama Based Training.

In a Role Reversal, the participant is invited to move out of his own position and enact the role of the other person. There are three powerful effects of doing this. Let's take a Manager - Team member relationship as an example.

Effect no 1.
Role Reversal will help the Manager to feel and understand the other role and how it reacts with its environment. For example the Manager gets more awareness about how the team member feels about and reacts to the role of the Manager.

Effect no 3.
Role Reversal also prevents the Manager from being trapped in his own defenses. By changing positions with the team member he produces new insight of the whole interaction which helps to create understanding rather than being stuck in his own perspective.

Bringing in professional corporate actors to help facilitate exercises like this is absolutely crucial for the success of role play. Would you like to learn more about why? Have a look at our website here.

And I couldn't agree more.

Whether you are a toddler or an adult, (role) play gives an unique chance to learn from each other in an imaginary world. I look forward to meeting you there!