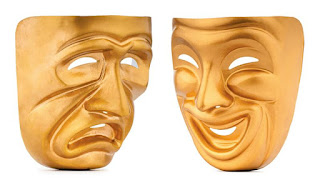 For many it's a modern, workplace form of torture by humiliation. The idea alone of having to do a role play. I notice this every day when I present myself to groups as a Communication Trainer and Professional Role Play Actor.
"I never learned anything from a role play" or "Oh no. I hate role play..." are frequently heard comments from people participating in one of my workshops.
So why doe people hate it so much?
Possibly because people imagine that they will have to 'act' and, as most do not see themselves as performers, this equates to being asked to do a school play...  at the office... in front of all those people who are about as afraid as you are.
More often than not, role-playing scenarios with colleagues do not work due to a variety of reasons.
People in the same team know each other well so it becomes impossible to see colleagues as that supposed frustrated customer, eager-to-please supervisor or whoever they are supposed to be portraying.
Luckily it doesn't have to be counterproductive or heighten people's fears of experiential training.
By using skilled and experienced actor/trainers who can utilize a range of creative learning methods in a safe and professional way, role play can develop interpersonal and communication skills extremely effectively. And there is a different form of role play that works for everyone.
In this blog I will share the four most popular forms of Experiential learning with use of role play:

1. Forum Theatre
Forum theatre relaxes a group of participants as there is no expectation to 'act' whatsoever.
What is forum theatre and how does it work? To begin with, two actors will play a short scene - for example, one actor is a manager and has to give her team member some less than fantastic feedback about his recent client presentation. We see an ineffective meeting in which the manager is, let's say, so averse to telling it like it is that nothing is communicated and the team member leaves with the feeling that it was a great presentation. Now the audience has an opportunity to question each character in turn about that meeting, what they each want, what difficulties they encounter, their communication styles etc.
The scene is then re-run with the audience given the power to stop the action - much like a film director - each time the manager does or says something that is not as effective as it could be, to give the actor some top tips. And so we go on a journey of stop-start, advising the manager, observing how this new behavior affects the team member' s behavior, getting our teeth into some healthy debate along the way and continuing until the characters have at least found some understanding of each other and a more effective means of communicating.
Forum theatre works well as we all have an opinion, especially when watching a scene being played out and there is no pressure for participants to perform in any way. It acts as a catalyst for lively conversation and debate around personality and communication styles.

2. Role Play Case Studies
Pre-prepared case studies are born out of diagnostic research. The actor/trainer has his own secret brief that directs him to challenge at times and guides him about 'what good should look like' in a particular instance.
Experienced actor/trainers can easily facilitate this process, explaining the set-up and then playing whatever character(s) the briefs direct them to, offering time-outs if the delegates get stuck. In that case, he facilitates some tips from peer observers or gently coaches the delegate into trying something different than his habitual response.
A safe, supportive environment is absolutely essential in ensuring that this interaction works successfully. The participants just have to be themselves and try to deal with whatever challenges and objections the actor throws their way. Role plays can be one-to-one or even one actor with a small group of participants, all of whom can chip in at will.

3. Bespoke Role Play
Bespoke role plays focus on real instances taken verbatim directly from the individual participants themselves. This may be a challenging situation that someone has already been faced with, and wants to re-visit to see how he could try different approaches, or an upcoming situation that he wants to rehearse and train up for instead of jumping in and hoping for the best.

Bespoke role play is not therapy, although key moments can certainly be therapeutic. Epiphanies are common. You often hear people comment after doing a one-to-one role play, or even just watching as an observer, that "oh, that's exactly what my boss does..." It can feel spookily real at times.

4. Critical Conversations
Role playing very simple, straightforward, mundane situations will not yield much in the way of growth or development, whereas focusing on critical or crucial conversations is where potential personal growth may well exist. The more there is at stake and the less one wants to explore a given situation, the more that optimum learning can be extracted. Critical conversations are those in which the stakes are high so clear, effective communication is imperative.
Critical conversations can range from a manager needing to motivate a team member, to addressing an instance of bullying in the workplace. In short, if we deem a conversation to be critical, there must be something sizable that we stand to lose and something of equal size and importance that we stand to gain. High stakes, in other words.
Apparently, the most critical situations for many people are telling a subordinate that they have a body odour problem or dealing with a crying male employee. It's not surprising that we tend to avoid dealing with critical conversations, then.
So there you go!
Four examples of experiential learning using role play.
Needless to say there are many advantages in using an actor/trainer:
They possess a wealth of practical knowledge about behavior models, emotional intelligence, personality styles, motivational drivers and coaching tools and are flexible enough to incorporate the client company's learning models. Naturally the actor/trainer will also have a solid theatre background, drama training and screen credits.
They can adapt the level of challenge to appropriately match the participant's skill level, ensuring that he provides a level of realistic challenge without being too easy or unnecessarily tough.
And no matter which form of experiential learning is chosen:
The greatest benefit is that it provides participants with an opportunity to feel what it's like to do things differently. And nobody ends up hating that!