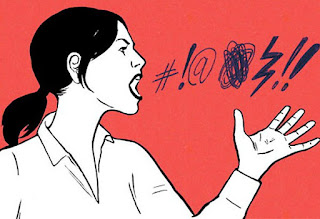 See, I really used to like ‘Shit’. A fairly innocent word, in the wide range of curse words available, that you can easily change to ‘Shoot’ should there be little ears listening.

So when I bumped my knee at the corner of my desk,  forgot my credit card after ordering a coffee or received another speeding ticket:
There was my favorite word.

But I write ‘was’, because recently a new curse word has entered my vocabulary.
And it’s a lot worse than ‘Shit’.

Now when I bump my knee at the corner of my desk, forget my credit card after ordering coffee or when I get another speeding ticket: There I go. The F word just effortlessly leaves my mouth.

Want to know where I'm going with this?

Well, you should know that ever since I’ve moved to Perth I’ve been surrounded by people who are dedicated F Sayers. And now, a few months later I unconsciously copied that behavior.

It is just what we humans do...
Ever since we are young we copy behavior from other people. Because instinctively we know by doing so we increase our chances of survival.
Luckily the chances of me not surviving by no longer using the word shit are very minimal; however the old instinct is still present. Both verbal as non verbal.

In Training workshops I frequently work with this interesting principle.
Recently I delivered a workshop on Non Verbal Communication and introduced the following activity to let people experience the effect:

I divide the participants into groups of three.
The numbers 1 and 2 start interviewing number 3 on a topic where he or she likes to talk about.

If I ask number 3, after a few minutes, with whom he had the most contact chances are high he or she will say number 1.

Often participants don’t really know why they had more contact with number 1.
Let alone that they are aware it was probably just because their behavior was being copied.

An eye opener for many.

Would you like to know more about how InterACT WA can help improve your Non Verbal and Verbal Communication? (I promise you I won’t curse...;)